The Commission published its proposals for the Renewable Energy Directive today as part of the EU’s Winter Package. You can read them here. Disappointingly, a loophole that allows non-renewable CCU-fuels to contribute to the EU renewables target has not been closed. Rewarding non-renewable technologies undermines the objectives of renewables policy and Sandbag will challenge the inclusion of CCU-fuels in the Directive.

Early drafts of the new EU Renewable Energy Directive (RED) suggest carbon capture and utilisation (CCU)-derived fuels could be included within the definition of renewable transport fuels. This change would enable synthetic fuels made from captured fossil emissions to be labelled as renewable even though the process yields questionable climatic benefits.

Converting CO2 into fuel essentially reverses the combustion process. CO2 that has been separated from flue gas is combined with hydrogen at high temperature to form methane or methanol. This process is a form of temporary CCU – where CO2 is converted into useful products but later released through combustion in other processes. In this case, CO2 could be taken from installations that produce emissions and turned into transport fuel.

renewable transport fuels of non-biological origin, waste-based fossil fuels and renewable electricity in transport can contribute to low carbon emissions […] It is therefore appropriate to include these fuels [low carbon fossil fuels that are produced from fossil waste streams] in the incorporation obligation on fuel suppliers.

CCU-fuels can be used as a means to store energy, particularly during periods when there is excess generation on the grid: Rather than switching off renewables when electricity demand is low, the additional energy in the system can instead be used to convert CO2 into a fuel source. Here, CCU-fuel may have the co-benefit of slightly reducing carbon intensity in the transport sector by displacing conventional fossil fuels. 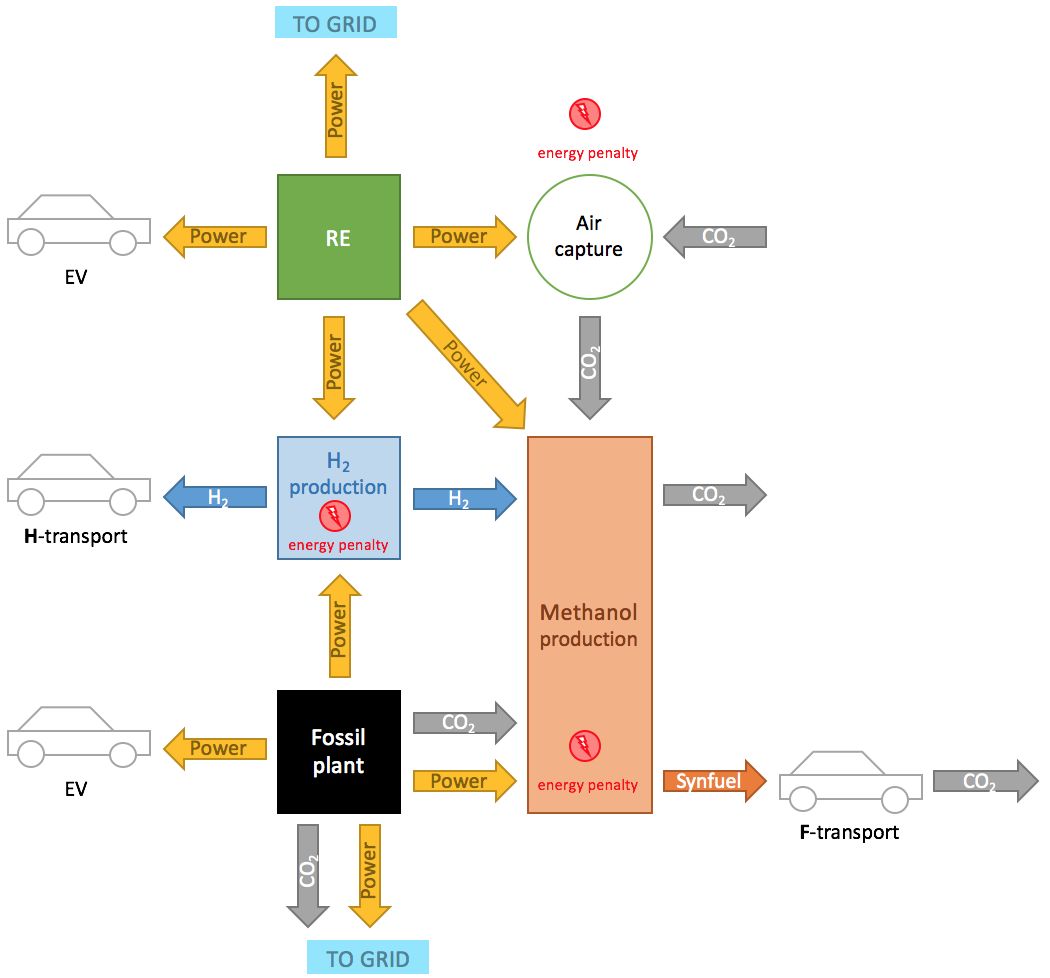 A tradeoff between efficiency and emissions

Though potentially less polluting than fossil fuels, synfuels are implicitly not carbon neutral: As well as re-releasing carbon during combustion, significant volumes of CO2 are produced at synfuel production plants that cannot be captured. Total energy requirements for synfuel production are also substantially higher than the energy released during its combustion since the processes of CO2 capture, hydrogen generation and fuel synthesis all incur significant energy penalties. As a result, methanol fuel produced via this technique will capture only ~10% of the total energy input – compared to an electric vehicle which retains ~75% of input energy.

In principle, CCU-fuels can help lower emissions but not without sacrificing huge amounts of energy which could be harnessed with much greater efficiency through other means such as electrification of transport.

There is also a wider context to consider.

At best, CCU synfuels can only marginally reduce emissions from Europe’s fossil fuel plants. Their inclusion in the Renewables Directive would distract from priority actions on climate change. To cut emissions in line with the Paris Agreement, Europe must accelerate its coal phaseout, and develop Carbon Capture and Storage (CCS) infrastructure on new and existing big emitters.